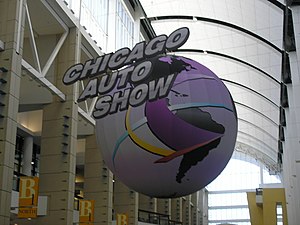 Sponsored by Motor Age magazine, the first Chicago Auto Show was held from March 23rd through March 30th in 1901. The event took place in the amphitheater of the Coliseum which offered plenty of seating around all sides of the building and cost exhibitors anywhere from $1 to $1.50 per square foot.

The show was held in the Coliseum through 1935 and then moved to the International Amphitheatre which boasts over 255,000 feet (compared to the 58,000 feet in the Coliseum). During the first show in the Amphitheatre there were about 29 different makes and 300 models on display and for the first time included trailers and motor coaches.

The show took a hiatus after the 1941 event and was not held again until 1950 following the Second World War and was the first major show, as well as the largest, held in the United States. At the end of its nine day run it boasted one of the largest turn outs to date with over 478,000 visitors.

Automakers were aiming more towards economy in 1960 and during the show Chevrolet displayed its Corvair with the engine in the rear; Chrysler introduced the Valiant and Ford showed off its new compact Falcon. It was during this event that visitors got a first glimpse at over 36 different imports, including Toyota, Deutsch-Bonnet and Fiat.

In the 1070’s the trend ran towards the smaller cars and automakers took this opportunity to introduce several new, or updated, models at the Chicago Auto Show. Ford displayed two new models, the Maverick Grabber and the Mustang Grabber, while Pontiac displayed a redesigned Firebird and Oldsmobile showed off its Rallye 350.

In 1980 it was determined that more space was needed so the area available was increased to 600,000 feet in order to accommodate over 700 different vehicles that were to be on display. This is also when those enthusiastic about performance got their wish; Chevrolet came out with the Corvette ZR-1 and even with complying with all of the emission and safety standards it was the best handling and fastest model at the time.

In 1998 the Chicago Auto Show drew a record breaking 1,080,637 visitors who were treated to the introduction of the new VW Beetle, Mercedes Maybach, the Ford Libre (considered a concept convertible) and even Kia sponsored an Elan sports car.

Last years show was the 102nd edition of the event and it covered over 1 million square feet of exhibition area. Some of the vehicles introduced were the 75th anniversary Chevrolet Suburban, the Kia Hybrid concept and the next generation Avalon.

The 2011 Chicago Auto Show will be held from February 11th through February 20th and covers over 1.2 million square feet of the McCormick Place center. If you decide to attend this event you will be able to see over 1,000 different types of vehicles including imported and domestic models, sport utility models and concept, or experimental, cars. It is a great event suitable for the whole family.