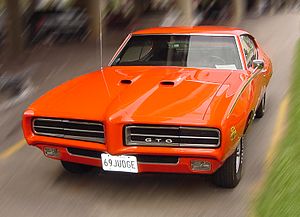 There are some that consider the Pontiac GTO, or Goat, to be the first real muscle car while others claim that honor goes to the Oldsmobile Cutlass 442. Let’s take a look at both:

When driving the Cutlass 442 you were in no way expected to sacrifice any comfort in order to have a snarling V8 under your hood. Beginning with the introduction in 1964 as an option package on the F-85, those three little numbers pretty much took on a life of their own. And, during the late 1960’s and early 1970’s they were considered the ultimate in sleeper cars; you had the ability to cruise around serenely in high style or you could terrorize the competition at the stoplight.

You may be wondering what the official meaning of the 442 was, well that depends as it did change over the years from: 4 – barrel carburetor, 4 – speed with dual (2) exhaust to: 4 – cylinders with 4 valves per cylinder and 2 camshafts. No matter what it meant the great balance between performance and luxury makes it easy to call this American sports car one of the best.

The Pontiac GTO is really considered by many to be the epitome of the muscle car even if its name was “borrowed” from Ferrari. When Pontiac decided to take a potent V8 and dump it into a formerly mild mannered coupe the American version of the GTO became as much, if not more, notorious as the Italian namesake. Pontiac then made the wise decision to stop putting such a label on their cars when during the 1970’s horsepower took a nosedive. And then, just as wisely, decided to revive the legend again in 2004.

Of course, there are some that criticize the understated design of the new car but many feel that it is much better than those Batmobile style Pontiacs of a few years ago and you should keep in mind that the GTO came to life with those plain Jane looks as well.

So, GTO or 442, which was the “real” muscle car; you can decide for yourself or perhaps we can just call it a tie.