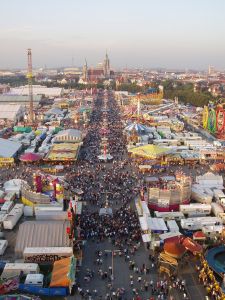 It all began with a wedding in October of 1810 given by the Bavarian Crown Prince known as Ludwig when he married Princess Therese of Saxony; he organized a horse race and pretty much invited everyone in Munich drawing over 40,000 people (which would most often be considered a good sized crowd but it pales in comparison to the 6.5 million people that celebrated Oktoberfest in 1997). But apparently a good enough time was had by all so that another race was organized to be held the following year along with an agricultural show.

Even though it is called Oktoberfest it actually begins on the third weekend in September and goes until the first Sunday of October and although the horse race was long ago abandoned there are many aspects that remain the same and even expanded upon. The celebration in Munich is still held at the original location of “Theresa’s Fields” (Theresienwiese), outside the front of the city’s gates. And while the agricultural show is still a part of Oktoberfest it is now only done every third year. Of course the food and beer stands, started in 1818, are still very much a part of this celebration.

The more modern celebrations now include having brewery sponsored halls, rather than small tents, that hold about 5,000 or so people and of course it now spans 16 days rather than the original day long festival. And, it has been cancelled in the past but normally this only occurs in the event of war or an outbreak of cholera.

The celebration usually begins with a huge parade of the Oktoberfest “lords” and the different representatives of breweries along with the traditional costumed dancers and performers, lots of music and of course, beer!