The Most Incredible Medieval Weapons You Never Know About 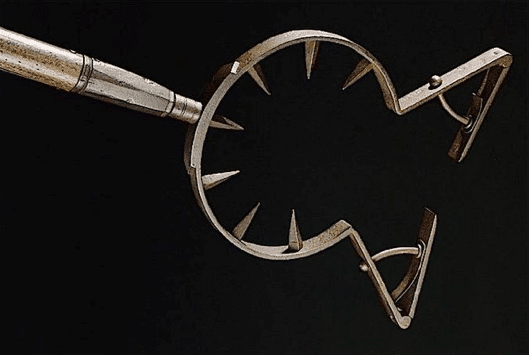 How much fun would it have been to live in medieval times? Not a lot you might think.

However, as well as indulging in popular hobbies such as laying siege to castles and watching everyone die of the Bubonic Plague you could also have tried to avoid dying horribly due to these insane medieval weapons.

You would probably feel a bit of a tough guy going into battle wearing your suit of armor and wielding a massive sword. Hell yeah, anyone would feel like a middle ages Die Hard with that sort of equipment. The only problem is that someone on the other side could have a sword breaker that they would use to, uh huh, break your freaking sword in two. Those cheating rascals would have you running for cover quicker than you could hum Greensleeves.

Ok, so you want a bit of extra security so you can waltz about that battlefield like the mean son of a medieval bitch you really are. Easy, just get yourself a horse. From the safety of your saddle you can watch as the peasants get mown down, the archers get arching away and you get whipped off your horse with a man catcher. Hang on, that wasn´t in the script. This devious device was a pole with a spring loaded trap that could be used to pull important people off their horses in order to hold them to ransom. 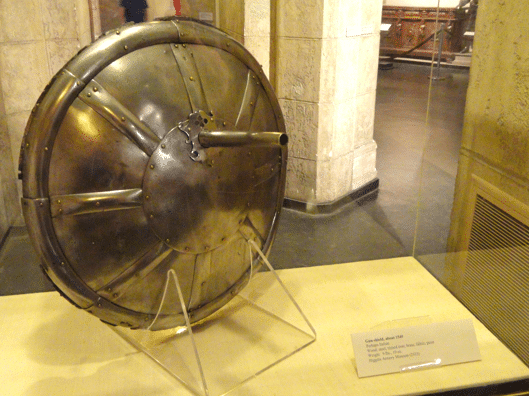 Ah ha, so we´ve discovered that this medieval battle malarkey isn´t as easy as it looked on Game of Thrones. In that case, you need a shield. A gun shield to be exact.  This was an Italian creation and was supposedly used by the bodyguard of King Henry VIII. It is basically your typical sturdy medieval shield but with a cunning hole for slotting a pistol into. 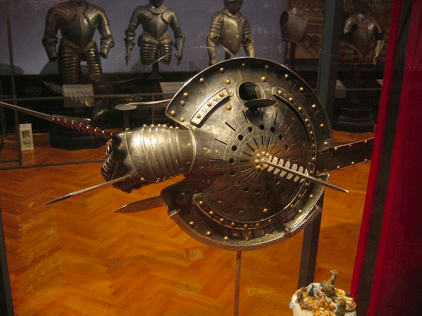 What´s that? You want a shield but would prefer something a bit jazzier than the standard sort of boring shield you can buy on Ye Olde Amazon? Why don´t you try on this Brandistock for size, sir? Sure, it sounds like a brand of tan colored pants for guys undergoing a mid life crisis but it´s really a fearsome looking medieval weapon. As well as being a defensive shield it is also filled with other stuff like a gauntlet with serrated blades, a long blade and spikes. I think there is a handy drinks holder on it too. 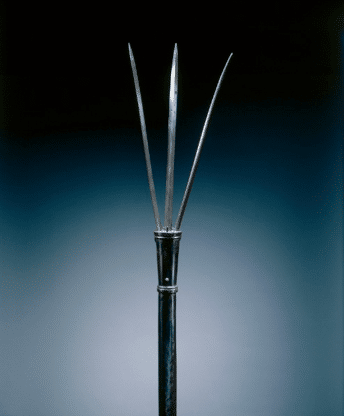 This nasty looking weapon was a pole which had a retractable blade on it. What´s not to like? The blade would slide out when the pole was thrust into the attacking position, just as you would expect it to do. 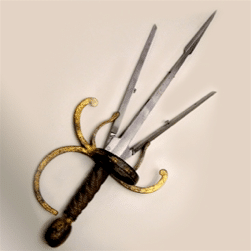 Why have just one dagger when you can have three of them? Normally you would need an extra arm sewn on or extremely flexible feet for this, but not with the triple dagger. This scary looking medieval weapon starts off a single bladed dagger and at the press of a button another couple of blades spring out. 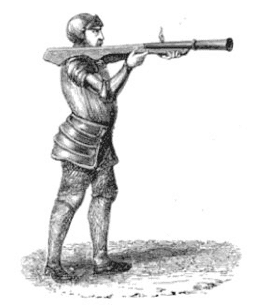 This type of middle Ages gun was often used by dudes – possibly on horses – to shoot other dudes (we´re a bit sketchy on who these people were but you get the point). It was set off by sticking a lit cord into the hole and fired off lead bullets. The culverin later grew into bigger weapons that were used on ships.