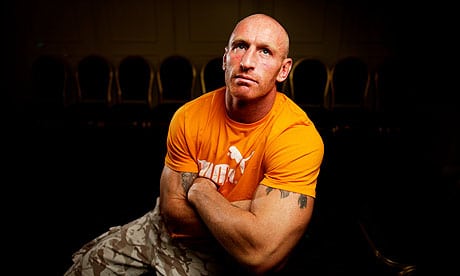 Gareth Thomas is a welsh professional rugby player that plays in Europe’s Super League. He’s 6’3 at 225 pounds. He’s been named to more national teams then any man in the history of the game. He’s broken his nose several times, both shoulders, lost teeth, and will drink and brawl with his friends. Oh yeah and he’s gay.

Here are some of his highlights:

When people think of gay males that’s certainly not the image that they have of them. The toughest, bravest thing that he did was not done on the field, but off it. He came out and when he finally did he felt an enormous weight lifted from him. Why have more people not done this? There has to be more athletes out there that wish to come out. Do other athletes feel that they need the level of respect among their peers and the sporting world in order to come out? How mature is society as a whole about being gay? Athletes are in locker rooms with other men, they hug each other and slap each others butts. Do athletes just not trust their teammates to be okay with it?

Gareth Thomas is certainly a step forward for gay men in sports, but another question they might be asking is what their fans or endorsements might think. Well, continue to play the game at a high level why should it bother them ? As you watch your favorite player dominate are you even thinking about his sexuality?

Here he is explaining his decision to finally come out:

“Unless the the stereotype is broken the society doesn’t change or accept anything else.”
-Gareth Thomas