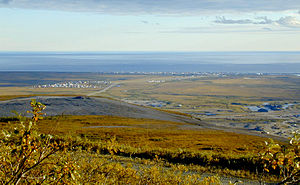 On November 8, western Alaska got the word that a storm of “epic” proportions, moving inland from the Aleutian Islands, was heading their way, promising to be one of the worst storms on record. Then weather service warned of heavy snowfall, hurricane force winds with gusts topping 100 miles an hour along with widespread flooding and erosion along the west coast of Alaska; this warning prompted the evacuation of several areas of Nome and the Seward Peninsula. An additional complication is the lack of ice off of Northwestern Alaska; experts say that sea ice helps to subdue the surge caused by a storm. When there is little to no sea ice then the full force of the 9 foot surge will be felt.

The strongest storm in 4 decades slammed its way into Nome and other coastal communities causing flooding, power outages and roofs being torn off buildings. There were gusts up to 85 miles an hour, however, the winds soon tapered down to about 55 miles per hour.

The weather service stated that there was a potential for an upper level disturbance surrounding this Bering Sea storm which could bring about 8 inches of snow to the Anchorage area which prompted a severe winter weather warning for the area.

Fortunately, for the size of the storm, there was not as much damage as was expected and no injuries had been reported. The village’s emergency managers have said that preparedness is quite possibly the reason that people weathered it as well as they did. They hold meetings twice a year on how to prepare for and deal with emergencies, even holding evacuation workshops.