Does A Man’s Drink Define Him? 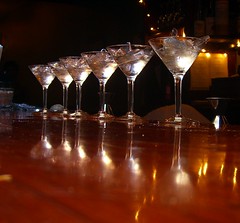 It’s true. Women think they have us figured out. It’s soooo easy, apparently. They even think they can analyze a man’s personality based on the drink that he orders. Exhibit A: the slideshow that Julie Fishman of Glo put together of a few examples of drinks men order, with the analysis courtesy of Manhattan bartend Dara Mahler and bartendner/blogger/author Jordan Catapano.  Check out their analysis and see if they’ve got you pegged…or if the ladies need to head back to the field for some more “research”.

Jack and Coke – “A weeknight drink for men who wear suits.” A whiskey and soda guy often appears as if he could drink for eight hours straight—even while making business deals—without slurring a word. While he can be overly macho, we’d like to think that this guy isn’t into playing games.

Wine – A guy who asks to see the wine list usually has an interest in art, culture and travel. But if he orders the house varietal without thinking, he might need some more grooming.

Light Beer – Mahler believes that light beer drinkers are most often partiers after quantity not quality, though there’s also the occasional fitness fanatic who doesn’t want to ruin his six-pack. The quantity guy may seem affable and fun-loving, but his heavy drinking could be a sign of trouble, whereas a calorie counter may be judgmental and unable to let loose.

Craft Beer – Catapano finds that “a man who drinks craft beer appreciates the finer things in life.” This type typically isn’t looking for a quick buzz, but rather seems to enjoy savoring the moment. And we like to believe that a man who sips high-quality beer will value a high-quality woman, as well.

Gin & Tonic – These men are generally polite and reserved—until they perhaps enjoy a few too many cocktails and morph into their more rambunctious alter egos. “These are often the guys who get thrown out of the bar then appear a few weeks later as if nothing ever happened,” adds Mahler, citing her experience.

Scotch – Characteristically patient and wise with a strong work ethic, a man who drinks fine-aged scotch is “accomplished but rarely boasts,” says Catapano. This kind of man is often serious and contemplative, so chances are he’s looking for more than a casual fling.

Vodka & Redbull – Either right out of college or still holding on to those glory days, this guy is—more often than not—a “hard partier who doesn’t mind waking up without a clue as to what happened the night prior,” says Mahler.

Dirty Martini – A martini man “likely has money and wants you to recognize it,” says Mahler. If he knows exactly what he wants in a drink (Grey Goose, straight up, with two olives), then he probably also has specific criteria for a mate. He can be difficult to please, as he looks for faults in everything, says Mahler.

Tropical Cocktail – Pastel-colored drinks festooned with umbrellas may look feminine, but don’t be fooled—a man who drinks them can be both strong and quick-witted. Most often comfortable in his own skin, “he likes what he likes, and the viewpoints of others are irrelevant,” says Catapano.

Tom Collins – Since this drink requires fresh ingredients and a perfect balance of flavors, this guy “understands that when you want something done right, you need to put some TLC into it,” says Catapano. We imagine that this man has a passion for details and would love planning fantastic date nights for the two of you.

White Russian – If he loves this hipster drink of the moment, then this guy probably regularly quotes The Big Lebowski. Likely a liberal into indie rock and anything retro, he may come off as trying too hard, but he is often well read and well spoken, ensuring conversations will never be dull.

“Whatever she’s having” – If a man doesn’t have a set drink and tends to just piggyback on your order, then he’s certainly easygoing, but he may also be complacent. A man who’s agreeable will probably treat you well, but his “whatever you want” routine could become frustrating over time.