DETROIT GETS KNOCKED DOWN … AND GETS BACK UP AGAIN! 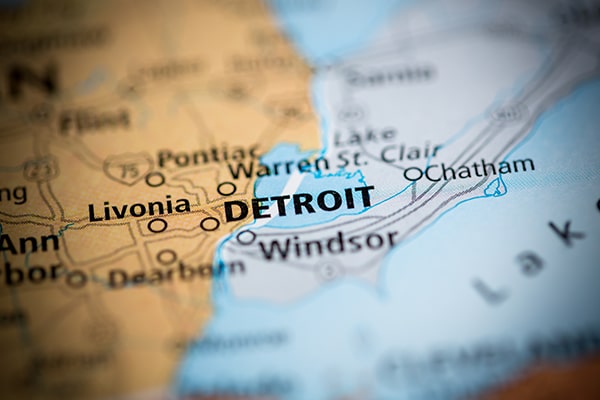 Detroit has a secret … it’s not the zombie apocalypse we’ve all been duped to believing. We’ve all seen the pictures of the Packard Automotive Plant, left abandoned and void of windows since the 1950’s and heard about the drop in population to less than half. It’s depressing.

Despite the changes in the automotive industry over the past fifty years, and its affect on the people and lifestyles of Detroit, it is a city that continues to evolve, adapt and innovate through these tough economic times. Despite the financial analysts and naysayers, Detroit is making a comeback sparked by young entrepreneurs and creative problem-solvers looking to leverage a very unique economic situation.

The Poorest Big City in the U.S.

It’s true … Detroit has been called the “poorest big city in the U.S.” in recent years. The city was directly affected by the rise and fall of the automotive industry in North America, eventually filing for Chapter 9 bankruptcy in 2013 (to the tune of 18 to 20 billion dollars). In addition, according to the 2015 Census, nearly 300,000 people in Detroit live below the poverty line (just over 39 percent of the population living on $24,250 a year). To top it all off, the unemployment rate (as of October 2016) is just over 11 percent. The national average is just under 5 percent.

This all may sound very somber … but it’s actually GOOD NEWS!

When Detroit qualified for Chapter 9 bankruptcy it essentially got a “new lease” and could negotiate a plan for adjusting its debts and refocusing its efforts on growth rather than just keeping its head above water. In the end the numbers have improved since 2013 as the unemployment rate has gone down (from 22 to 11 percent), and according to Forbes magazine, Detroit is one the fastest growing entrepreneurial communities in Michigan. In fact, while numbers have decreased nationally, the number of venture capital (VC) firms, the amount of capital under management and venture investment has nearly tripled in the last five years.

A Legacy of Greatness

Since its humble beginnings, Detroit has always been a place for innovation and change. As the hub of automobile manufacturing in the early 1900’s, the “Motor City” became the global symbol for modern advancement and the growth of an entire industry. The “Big Three” automobile firms – General Motors, Ford Motors, and Chrysler – were headquartered in metropolitan Detroit and fuelled an industry that provided hundreds of thousands of people with good paying jobs. Before the decentralization of automotive manufacturing in the 1950’s, Detroit had become the fifth largest city in the United States.

With a rich music legacy, Detroit is the birthplace of Berry Gordy, Motown Records, and “Motown” music. The music style that emerged from this record label introduced the world to Stevie Wonder, Diana Ross and the Supremes, Lionel Ritchie and the Commodores, the Jackson Five, Michael Jackson, and so many more. The influence of Motown has since shaped various genres of music including R&B, doo-wop, soul, pop, rock and roll, and rap.

Given the name “The City of Champions” in the 1930’s, Detroit is no stranger to the sports scene and is home to four professional American sports teams (only 12 cities in the U.S. have teams in all four major North American sports):

This is a city that knows how to roll up its sleeves, fight for what it believes in (against the odds), and win. I believe Detroit is on its way back to greatness again … in business, art, and culture.

Okay … it may seem like a bit of a “stretch” but the city certainly has the structure and framework needed to become a leading major city in the future. First, let’s get the facts straight … Detroit, Michigan still qualifies as a big city for the following reasons:

According to the Detroit Economic Growth Corporation, downtown Detroit has added over 16,000 employees since 2010, the vacancy rate has significantly decreased and 9 billion dollars have been invested in real estate projects in Greater Downtown. The Motor City has been, and continues to be, a destination location with a lot of potential for visitors and new residents looking for a fresh start!

As the city is recovering from the Chapter 9 bankruptcy of 2013, the city has become favourable for entrepreneurs looking to start up a profitable business. You can get a house or storefront far cheaper than any other city in the country and there are several programs available to help entrepreneurs launch successful businesses in the city. Check out just a few of the organizations supporting entrepreneurial growth in the Motor City.