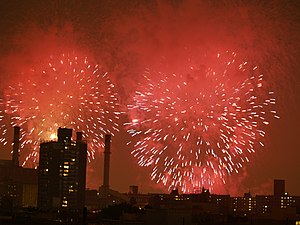 Our second President, John Adams, stated that our Independence Day ..” ought to be celebrated by pomp and parade, with shows, games, sports, guns, bells, bonfires, and illuminations from one end of this continent to the other.” And, obviously, Americans take the President’s wishes to heart; with the emphasis being on illuminations.

Make no mistake, the largest fireworks displays usually take place during July 4th celebrations, so to follow is a list of some of the most spectacular displays that our country offers.

Possibly the most fitting of places to celebrate with our nation’s monuments serving as backdrops to the magnificent fireworks display. There is a parade that starts at noon beginning on Constitution Avenue filled with bands, military units and floats. The National Symphony Orchestra and miscellaneous pop music bands show their stuff after the parade and fireworks start at about 9:00 pm. Of course, there are other activities that take place during the whole week. Not to be missed.

Time Magazine rated this as one of the top 5 displays, which takes place at Lake Union, in our country. There are activities and entertainment for children located in the park as well as lots of food and a beer garden for the adults. But the major draw are the fireworks which are set to classic oldies, current hits and traditional anthems and usually have nautical effects that combine with the water’s surface.

For the motorcycle and car lovers this city offers an unconventional celebration located at the Fairplex called “KABOOM! Spirit of America”.  Shows include an air freestyle motocross event, a monster truck extravaganza and culminates with a huge fireworks display that is put on by the company that was responsible for the 2004 Summer Olympics fireworks.

It’s really not surprising that Boston pulls out all of the stops for our birthday festivities since they were the home of the Boston Tea Party. Their week of events include activities such as walking tours, free concerts and historical reenactments. However, the biggest draw is their Boston 4 Celebration lasting two days (3rd and 4th) that ends with an extraordinary fireworks display that utilizes about 10,000 devices while the Boston Pops plays in the background.

Many believe that the waterfront here holds the greatest of the birthday bashes; there are barges and tug boats that get launched onto the Mississippi with a theme of “Go 4th on the River”. Concerts are held at the French Market Performance Pavilion along with Mardi Gras style parties. Take the free ferry to the Jazz Walk of Fame and settle back to watch the extravagant display over the river.

So, why not do as John Adams suggested and for “4th” and celebrate.