IT IS BOURBON SEASON!: 9 FASCINATING BOURBON FACTS FOR YOU TO SIP ON

You feel that nip in the air? You know what that means? It’s Bourbon Season!

Bourbon can hit the spot almost any time of year, but there is something about its richness, sweetness and body that makes it perfect for the fall. It warms you up, but still has a rich, sugary sophistication. Celebrate the season learning about this distinctly American spirit.

That’s right. Like Champagne bourbon is regional. And while some would argue otherwise, many staunch bourbonheads travel to Kentucky every year to sample and tour the distilleries. (Note: Jack Daniels, made in Tennessee, is not considered bourbon. It’s Tennessee Whiskey.) That being stated, most aficionados believe that bourbon must achieve certain distillery standards, and that the place distilled is negligible.

Since 1999, bourbon production has grown more than 190%, with smaller batch distilleries popping up like crazy.

In order to meet industry standards, all bourbon is distilled from 51% corn mash. It is then aged in barrels made of charred oak.

Bourbon is stored in barrels at 125 proof. It is then bottled at about 80 proof. 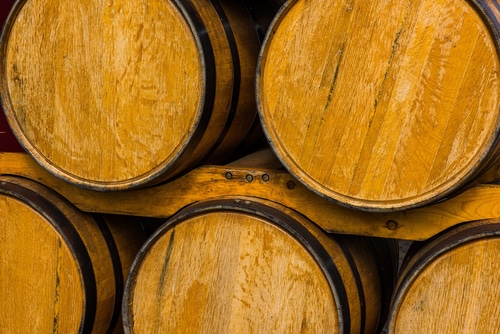 Bourbon must be aged for a minimum of two years to qualify as the real spirit.

As per United States law, a bourbon barrel can only be used once. However, whiskey distilleries around the globe purchase the barrels to store all kind of spirits.

According to legend, the first batch of bourbon is credited to a preacher named Elijah Craig who used a burned, sterilized barrel to store his corn hooch.

Fact 8: Bourbon and meat were born together.

Well, not born together, but they are natural pairings in more than the culinary sense. Many bourbon distilleries are near cattle ranches, as the corn mash is a perfect feed for the cattle.

More than many other spirits, bourbon can make a great cocktail, or be served neat. Every bourbon is a little different and finding the differences is a pleasure many Americans (and others) have celebrated for years.

Now, go out and grab some. It’s the American thing to do.