Arcade Fever: Arcade Games of The Past 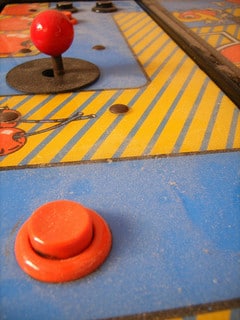 Arcade games ( or coin-op) have been around almost one hundred years. Yes, you heard it right. The earliest “arcade games” were at the midways of amusement parks in the 1920s. Fortune teller games and ones that played mechanical music were very popular at places like Coney Island. In the 1930s, pinball machines were introduced giving way to the pinball craze of the late 1960s and early 1970s. The first-person shooter game was “Duck Hunt” by Sega in 1969. The game featured animated targets and printed out your score on a ticket. We’ve come a long way in gaming technology. Presently, you can play a game from anywhere with anyone in the world. Let’s take a look at how we got there from the Golden Age until now.

Earliest of the coin operated video games. Installed at Stanford University in September 1971. It preceded “Computer Space”, the first mass-produced video game by two months. It would cost a dime per play or three plays for a quarter. The wait to play the game was said to be at least an hour.

Popular console name Atari was the creator for the ultra simple, yet competitive game, “Pong”. Pong is like tennis with simpler designs. The game features only solid lines and a square ball. The game was released in 1972 to major acclaim. The cabinet had the wood look with the front panels in harvest gold color. Pong was the first game to go transfer to home playing. Many pong home games still exist and work to this day.

Developed in Namco in Japan and imported by Midway, Galaxian is sort of like Space Invaders, but the aliens attack by diving at your ship as well as shooting back at you. The cabinet was a combination blue/green color with a mechanical bug on the front. The world record holder with 1,653,270 points is Aart Van Vliet of the Netherlands.

The mainstream darling of video games, Pac-Man was developed by Namco and brought to the US by Midway in October 1980. Pac-Man was hot in pop culture soon after. The game features a yellow circle with an open mouth chomping little round pellets through a maze while being chased by ghosts. When Pac-MAn chomps a power pellet he can turn around and eat the ghosts. Each level gets more difficult and the ghosts get faster. Pac-Man merchandise was sold in the millions. Everyone had something related to Pac-Man; Kids had pencils, backpacks, cereal, clothing, stickers,etc. A big reason why Pac-Man was popular was the fact that parents also had fun playing the game with their children. The cabinet was a bright yellow with the characters scattered around it. Pac-Man is still popular today, the game is featured on many fan based websites around the world and merchandise is becoming quite valuable to collectors.

Maneuvering your frog from the street to its slot at the top of the board is the objective. Seems easy, right? It’s not that easy. Frogger is a great game that still holds up today. The big rig trucks, the race cars, and fast moving logs are all trying to stop you from getting to your goal. The music is simple, yet not distracting and it plays a delightful tune when you fill the slots and reach the next level. Froggers cabinet was a sight to see. A giant frog leaping forward with a tie around his neck and a tan briefcase in his hand. Frogger was definitely addicting.

Games like Tron, Missile Command, Pole Position, Paperboy, and Qbert, you would be hard pressed to become bored in an arcade. Full of excitement and adventure, the arcade was somewhat of a getaway from everyday life. Every year the games were getting better and better. They were becoming more realistic too! Dragon’s Lair (1983) was played like a movie. The characters were almost real, thus becoming a precursor to what we play now. The game also cost fifty cents instead of the standard quarter. Donkey Kong was a huge hit in 1981 and after it’s success, there were many more Donkey Kong games available to play.

Arcades like the ones in the 1970s and 1980s have basically ended. Not many are left that feature the true arcade experience. In 2011, a new hybrid of arcade games began popping up in New Jersey. They are called “Barcades”. Barcades feature a video game arcade/full bar for customer enjoyment. Many other states have adopted this theme and it seems pretty successful. The one problem with the “Barcades” are the restrictions. Only someone of drinking age can have the pleasure to partake in the fun.

Although the true arcades are a thing of the past, we still look back on them fondly. The fun that was had with a few quarters could never be duplicated. We will always have saturdays at the arcade.